When I started writing Antarki Superhero of the Americas – Clash of the Descendants I didn’t really know each of the characters’ personalities however, as I typed away on my computer’s keyboard, each of the characters began to come to life right in front of my eyes! I saw them emerge from the pages of the story with all their strengths and weaknesses, their hopes and fears, their believes and behaviors. The first one to do so was Alfredo Peña, the main character. Al is a good kid. He is an orphan who, together with his sister Jessica, lived most of his life with Estela, an old friend of his parents. He is very protective of both Estela and his sister who is actually stronger and more skilled in martial arts than him. He is extremely optimistic and see life from a “glass half full” point of view which drives J.C. bonkers. His favorite saying is “I have a good feeling about this!” and every time he says it invariably something bad happens. This however doesn’t change his optimistic view of the world because in the end everything works out just fine. An optimistic protector in a cynical, dangerous world. No wonder he is the main superhero! 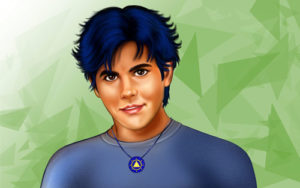